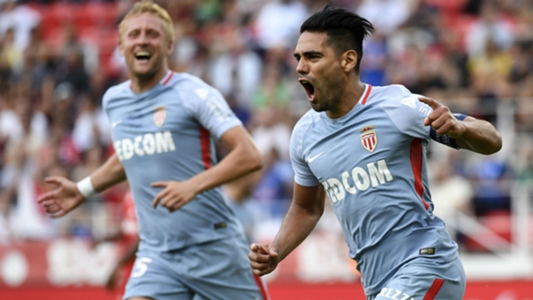 Radamel Falcao says his current hot streak for Monaco is a highlight in his career.

Colombia striker Falcao hit 30 goals last season as Monaco claimed the Ligue 1 title and reached the semi-finals of the Champions League against the odds.

The 31-year-old has already hit a remarkable 11 goals in just seven Ligue 1 games this term, including a double in Friday’s 4-0 win at Lille, which saw him rack up 200 goals for European clubs.

With league crowns, and two Europa League medals to his name, Falcao’s is a storied career, but he believes he is now at the peak, having recovered from a serious knee injury and returned to his best following underwhelming loan spells at Manchester United and Chelsea.

Falcao told Canal+: “Even Porto’s Falcao wasn’t scoring that much.

“I’m grateful for the team’s efforts and thank God, I was efficient.

“It’s a highlight of my career, I’ve been praying a lot to get to this moment so I can play lots of games and score that much.”

Monaco will welcome Falcao’s former club Porto to Stade Louis II in the Champions League on Tuesday, but the striker will have no split loyalties, despite his fondness for the Portuguese giants.

“Porto is a special game for me and I want to help Monaco get the three points,” he said.