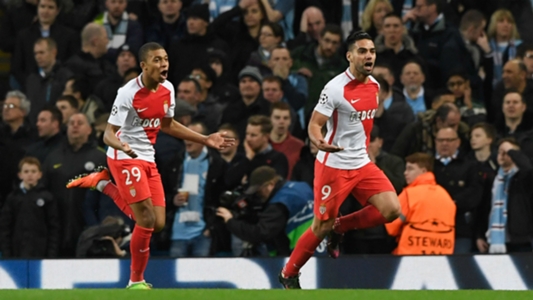 Radamel Falcao concedes Monaco find themselves in a “complicated situation” as Paris Saint-Germain seemingly close in on a deal for their prized asset Kylian Mbappe.

Teenage striker Mbappe is reportedly on the verge of joining title rivals PSG on an initial loan deal that includes a compulsory purchase option of €180million.

The transfer would make the France international the second most expensive player in history after Neymar, who joined PSG from Barcelona for €222m this month, with the Parisian club believed to be structuring the deal so as not to fall foul of UEFA’s Financial Fair Play regulations.

Speaking after Monaco’s 6-1 thrashing of Marseille on Sunday, in which Falcao hit a brace and Mbappe remained an unused substitute, head coach Leonardo Jardim accepted the 18-year-old might soon leave.

Falcao was tellingly praised by Jardim as a “team player” afterwards and the Colombia international, formerly of Atletico Madrid and Manchester United, is sympathetic over the strains currently being placed upon Mbappe, with whom he formed a lethal partnership during the second half of last season.

“It’s a complicated situation,” he told reporters. “He’s a young man, he’s only 18. We have to think about him too and we have to stay calm.

“I hope that everything will be resolved quickly for him and for us.

“It’s a personal decision that every player could have. I respect it.”

Fabinho concluded Monaco’s scoring on Sunday from the penalty spot, the Brazilian midfielder having also been linked with PSG.

The Ligue 1 champions have lost Bernardo Silva and Benjamin Mendy to Manchester City, and Tiemoue Bakayoko to Chelsea from their title-winning side, while Liverpool have reportedly joined the clubs trying to sign winger Thomas Lemar.

Adama Diakhaby, a close-season signing from Rennes, joined Falcao in attack against Marseille and got on the scoresheet, and the France Under-21 forward was bullish over the prospects of Monaco retaining their remaining stars.

“Fabinho and Mbappe… I did not say goodbye to anyone,” he said.

“We said we’d meet again after the [international] break. What will happen will happen.”