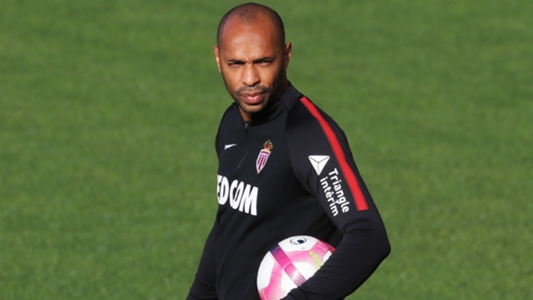 Thierry Henry has described it as “an honour” to come up against Diego Simeone as he attempts to keep Monaco’s Europa League hopes alive.

The Ligue 1 side cannot progress to the Champions League last 16, having taken just one point from their opening four Group A games, and a win over Atletico Madrid on Wednesday is needed to give them a realistic chance of finishing third.

Henry’s side come in having finally broken through under the former France international, defeating Caen last weekend 1-0.

Not only was that their first win under Henry, but it was also Monaco’s first victory in any competition since August.

However, the trip to the Wanda Metropolitano represents one of Henry’s toughest tests since taking charge in October and the former Arsenal star admits it will be a challenge to take anything from Simeone’s side.

Still, he insists his players will have no fear of a team they lost to 2-1 back in September and looks forward to the experience of facing off against one of the game’s finest managers.

“He’s one of the best coaches around at the moment,” Henry told a news conference when asked about Simeone. “It’s an honour to come up against him. I have a lot to learn.

“I’ve been studying Atletico for a long time – I know what we need to watch out for and which players can make the difference. We know they never give up and have fantastic supporters.

“There’s a slim chance of getting into the Europa League, but it’ll be tough. We’re playing with young players. We’re not scared.”

Striker Radamel Falcao is looking forward to taking on his old club on their own turf and hopes to help some of Monaco’s younger players not to be overawed by the occasion.

“It’s always good to be able to return to Atletico’s stadium, it’s been a while since I’ve done so,” said Falcao, who won three trophies with the club between 2011 and 2013. “I’ll always have the moments and memories from here. Meeting the fans and the club again will bring lots of emotions.

“Since the start of the season, we haven’t had all our players available. The coach has had to rely on young players and academy players. Our role as more experienced players is to trust in them so that they can give 100 per cent for the team.”